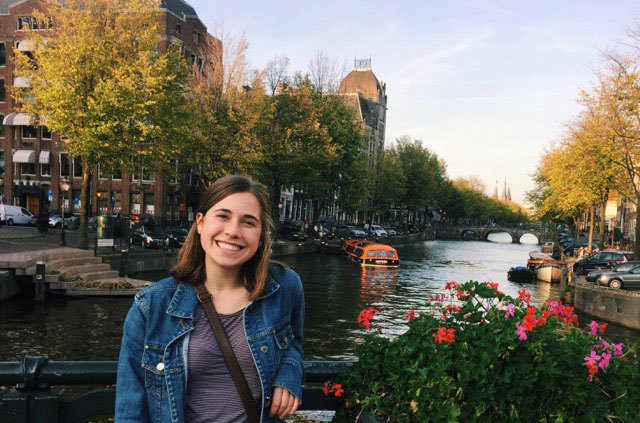 Sipping espresso and snacking on pastry, senior Terese Schomogyi counted the number of disposable cups carried out of a café into the sloping streets of Amsterdam in the Netherlands.

With funding from the Glynn Family Honors Program, Schomogyi traveled last year to Amsterdam and Stockholm, Sweden, to study sustainable and ethical practices in café culture and marketing, a versatile project that would combine all her passions — political science, peace studies, and sustainability — into a senior thesis.

Or, so she thought. In research, sometimes things don’t always go according to plan.

“I am so grateful for the Glynn program because they were completely supportive of my exploration,” she said. “My adviser told me that thesis exploration is discerning whether you actually want to study something or not. If you discover that you don’t, great.”

After arriving at Notre Dame, Schomogyi chose to study political science because she wanted to learn how governments worked, especially in an international context, and saw the potential for the major to launch her into an array of careers. 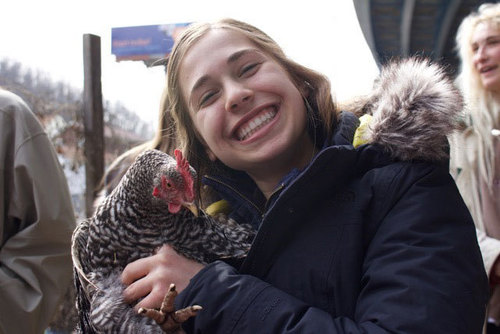 As part of a trip to Appalachia through a Center for Social Concerns seminar the spring of her freshman year, Schomogyi learned and served with the local nonprofit Grow Ohio Valley on projects rethinking food injustice.

Yet she yearned to explore the human and tangible side of political theories, and she found that on a maple syrup farm in Wheeling, West Virginia. As part of a trip to Appalachia through a Center for Social Concerns seminar the spring of her freshman year, she learned and served with the local nonprofit Grow Ohio Valley on projects rethinking food injustice.

She also stayed at a Catholic Worker home in Wheeling, which exposed her to how Catholic social teaching can be lived out in community. The following summer, she worked for an environmental nonprofit on the Kenai Peninsula in Alaska, learning about habitat restoration at one of the last wild Pacific salmon rivers in the world.

Her travel experiences and nonprofit work inspired the Tacoma, Washington, native to add minors in both sustainability and peace studies.

“I’ve always been kind of earthy-crunchy,” said Schomogyi, who also served as the sustainability commissioner for Ryan Hall during the fall of her junior year. “Because of where I grew up, I’ve been very environmentally minded, and I want to conserve the outdoor spaces I’ve fallen in love with there and elsewhere. But I also wanted to learn more about how environmental and climate change specifically affect people who live on the margins of our society. People can’t live without a healthy planet, and if I care about nature, I have to care about the people who live in it, too.”

A process of discovery

Eager to combine all three of her academic interests, Schomogyi embarked on a senior thesis discernment journey during the fall break of her junior year to the Netherlands and Sweden.

An avid coffee drinker, Schomogyi wanted to investigate how fair trade coffee products are branded and marketed in Stockholm, the capital of the country with the highest consumption rate of “green” or unroasted coffee; Amsterdam, the birthplace of the fair trade certification system; and Chicago in the United States. 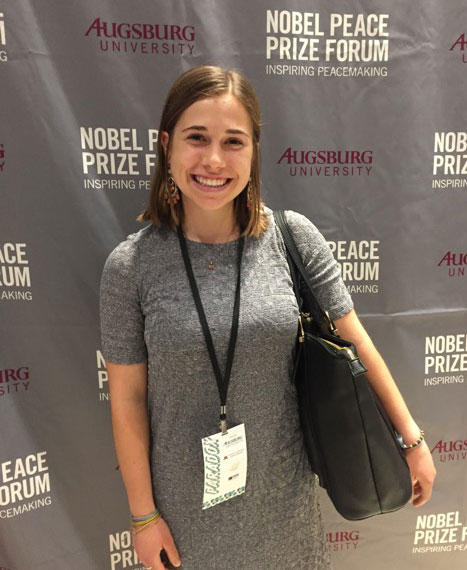 Every day, Schomogyi sat for hours in local cafés, flipping through fair trade labels on coffee shelves, asking baristas about sustainable agricultural practices in coffee-making, and counting the number of consumers who ordered coffee in to-go cups and those who sat down with reusable ceramic mugs. She also considered how the art in cafés marketed certain aspects of the coffee industry over others.

“Seeing European café decor, which is more likely to show the plants and stories of coffee bean sourcing, and those of their American counterparts in Chicago, which often display the industrial side of coffee protection, namely the roasting and packaging practice, led me to reconsider the complex web of ethical coffee production and consumption in my own country,” she said.

Later during Schomogyi’s semester abroad in Santiago, Chile, she noticed that locals mainly drink instant Nestlé coffee rather than rich coffee grown locally in South America — another element of the complex coffee industry that speaks to economic inequality she encountered away from home.

Weaving a thread that would meaningfully address social justice, local community empowerment, and political principles in the coffee industry proved more difficult than she anticipated.

“Ultimately, a lot of the research questions I had in mind were already answered by scholars,” Schomogyi said. “I decided I needed to look somewhere else, where I could contribute to the academic conversation.”

While she was still abroad, she emailed her thesis adviser, political scientist Susan Pratt Rosato, to say she wanted to scrap her project and pursue something regarding environmental peacebuilding instead — another area of interest that combined her three key academic disciplines.

Schomogyi was incredibly nervous, but she was relieved to get an overwhelmingly positive and supportive answer.

“She was like, ‘Yeah, this makes perfect sense why you would not want to continue with the coffee project. I don’t know much about environmental peacebuilding, but I am willing to learn with you. Let’s go,’” Schomogyi said, recalling Rostato’s response.

“As soon as I finished my project proposal, I knew right away it was going to be so much more fruitful, and I was so excited to start investigating it.”

Schomogyi switched gears to pursue a project on how international peace parks — conservation areas between national boundaries — might help ease tensions between countries as they engage in a joint effort to preserve wildlife, landscapes, and natural resources.

She first learned about the subject during a peace studies seminar, and is now planning to research the U.S.-Mexico border in Arizona, where political tensions have loomed over issues of water access, indigenous rights, and human and animal migration. This time, Schomogyi knows she has a topic that will produce substantive results.

“As soon as I finished my project proposal, I knew right away it was going to be so much more fruitful, and I was so excited to start investigating it,” she said. “My ultimate goal is to develop a strategic plan or proposal to implement a peace park in this border area.”

A quest for purpose

After graduation, Schomogyi hopes to pursue full-time service work for several years before moving on a masters program in environmental conservation and policy. 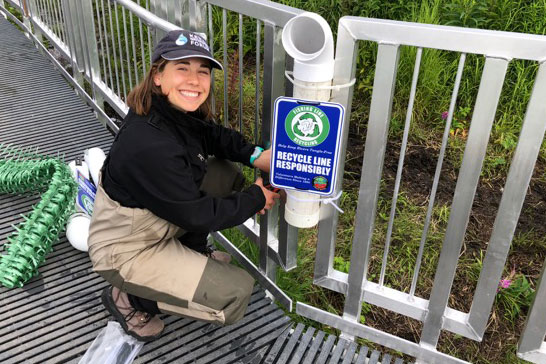 During an internship at the Kenai Watershed Forum in Alaska, Schomogyi’s work included putting up tubes at popular salmon fishing holes to collect fishing line to be recycled, rather than littered on stream banks.

Schomogyi might have changed her research topic, but her desire to help society and nature flourish together has remained constant.

“The things I value are living in community, working and learning alongside others, and engaging in different cultures — and being outside as much as I can,” she said.

Schomogyi has also discovered that her quest for purpose — no matter how indirect the journey might be — has strong support at Notre Dame.

“The College of Arts and Letters has allowed me to explore what it means to be human,” she said, “from a cultural, political and theological perspective.”

“The College of Arts and Letters has allowed me to explore what it means to be human — from a cultural, political and theological perspective.”

Originally published by Ashley Lo at al.nd.edu on November 19, 2019.