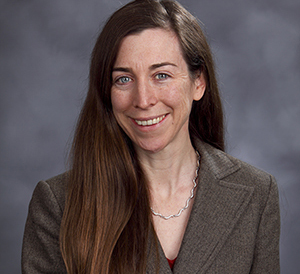 Eileen Hunt Botting’s Glynn Family Honors Program students have suggested, only half-jokingly, that had someone only given Dr. Victor Frankenstein’s creature a hug, a lot of violence and tragedy could have been avoided.

The notion seems far-fetched and would have certainly made Frankenstein, Mary Shelley’s seminal novel, a bit anticlimactic. But Botting, an associate professor of political science, has come to believe those students aren’t far from Shelley’s main point—that so much can go wrong when society shirks its responsibilities for its most vulnerable citizens.

Botting will have the chance to elaborate on that theory over the course of a year thanks to an American Council of Learned Societies fellowship supporting her book project, Frankenstein and the Question of Human Development.

She will examine Shelley’s 1818 tome as a literary form of political philosophy that presses readers to consider the fundamental rights bestowed upon children at birth.

“Shelley wrote a philosophical novel that allows us to explore the issue of basic human rights,” Botting said. “She’s setting up a kind of philosophical thought experiment that enables readers to envision and justify the fundamental rights of children to care and education.”

Born in 1797, Shelley was the daughter of political philosophers William Godwin and Mary Wollstonecraft. Her mother wrote on the importance of educating children, a concept Botting believes was key to Shelley’s mode of thought when writing her novel.

After Victor Frankenstein reanimates the tissue of corpses to make new life, he is instantly horrified at what he has done. He abandons the creature, who then must fend for himself.

“She was using the novel as a way to address fundamental questions of political philosophy,” Botting said. “I don’t think there is any doubt that she had her mother’s philosophy of basic human rights for children on her mind when she wrote Frankenstein.”

In her book, Botting will detail the Frankenstein myth’s philosophical sources, moral issues, and political legacies, with a special focus on the story’s power for theorizing children’s rights.

Through five years of teaching a course on Wollstonecraft and Shelley in the Glynn Family Honors Program, Botting said, she and her students have come to see the creature not as simply a warning about the dangers of overreaching science—a classic interpretation of Frankenstein—but as a newborn who came into the world with certain rights that were ignored by his father and, later, a society that is horrified by his crimes.

The creature’s violence stems from being misunderstood while on a quest for things that should have been guaranteed upon his “birth,” such as food, shelter, and love.

“Those classes and students really pushed me to see the creature as an innocent who has been harmed by society,” Botting said. “He has to raise himself and try to become a moral being on his own. Shelley is basically asking for you, as a reader, to see the creature as an abandoned baby and feel what it would be like to be so abandoned. Most readers will see his descent into crime as a result of his abandonment by his father and his mistreatment by society.”

In the nearly 200 years since Frankenstein was first published, society is still grappling with the issues of which rights and how rights should be afforded to children, Botting said.

That’s easy to see in many developing countries, where some children are not afforded an education because of social status or gender, she said. Even in the relatively prosperous United States, families that don’t properly care for children set those children up for difficult lives.

Following her mother’s political philosophy, Shelley might say that in cases where parents fail at their responsibilities to ensure the rights of their children, the state has an obligation and interest to provide those rights. As the story of Frankenstein’s creature models for us, those people who are not cared for lead to instability in society.

“Children who have the extreme misfortune of being raised in a neglectful way still have a right to be cared for and educated,” Botting says. “Furthermore, society breaks down when children are denied these basic rights.”

A fellow of both the Kroc Institute for Peace Studies and Nanovic Institute for European Studies, Botting hopes to complete her book by 2018, the bicentennial of Shelley’s work.

“I’m so grateful to the ACLS and Notre Dame for allowing me to take a year away from teaching to write this book. My interest in the topic has been percolating in my mind since I first read Shelley’s novel as an English literature major at Bowdoin College. It is a dream come true to finally be able to focus my time and energy on it,” Botting said.

“It is also good timing for me as a political philosopher, for as I work on this project I am caring for my infant son and learning each day from him what in fact the fundamental entitlements of children are.”